I'm delighted to share with you my review of a hard scifi novel, Fighting Gravity, by Leah Petersen: 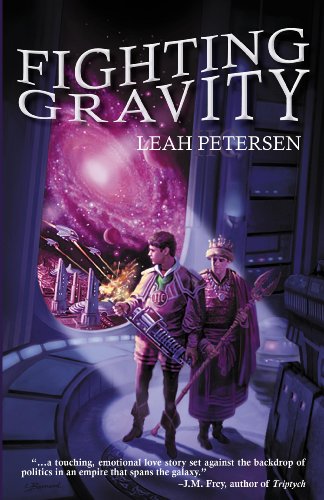 5.0 out of 5 stars A Whirlwind SF Romance, Excellent Trilogy


“Fighting Gravity” by Leah Petersen is a science fiction gay romance that follows Jacob Dawes starting with his removal from the ghetto to the Imperial Intellectual Complex, where he is expected to benefit the Empire with his genius and, somehow, fit in with his prejudiced upper class peers. For a Romance, the book is high on smart details and serious themes which raise Fighting Gravity to the cream of modern science fiction. Never does the reader get the myopic sense that Fighting Gravity is about Jacob Dawes and whomever he happens to be in love with at that moment. Instead, the book is as much about social structure and personal improvement as it is about the unpredictable human heart. At the same time, Leah Petersen never loses sight of the personal relationships that make Jacob’s narrative a Romance that will have you racing to get to the end and then pining for the next installment.
Fighting Gravity is not YA, yet the characters are in their teenage years, so it may appeal to and be appropriate for young adult readers who are ready for more mature themes. Although the characters are teenagers, the perspective is of Jacob as an adult relating a story of his past, and the next book in the series will take the characters into adulthood. But what really separates Fighting Gravity from your typical YA book is that the romance is more realistic and more mature, reflecting the complexities of real life relationships and how they form, break apart, and evolve when the participants are faced with intrapersonal, interpersonal, and external challenges. Jacob’s relationships are affected by life changing events such as Jacob living on a spaceship for a year, as well as by Jacob’s human inability to explain or control his actions one hundred percent of the time. As the characters encounter these obstacles, they each strive for healthy relationships and a stable position in life. In other words, while the characters make their share of questionable decisions, the love interest is not a creepy jealous stalker type whose behavior is made all the more abominable by the other characters’ blind acceptance. Jacob Dawes is an antihero, but one who, like most good antiheros, eventually realizes that he’s due for self-improvement. For these reasons I find Fighting Gravity to be no more objectionable for a mature teenage reader than many of the standard classics on a high school reading list.
As much as I love a good Romance, my favorite aspect of Fighting Gravity is its tip-of-the-iceberg science that categorizes it unabashedly as Science Fiction. Like other great modern writers, Leah Petersen effectively brings Science to the forefront without bogging down the story or making the reader feel like they need a Masters in Everything. You come away with the sense that the author knows her stuff, without having to dive into obtuse pages describing how binary star systems work or why faster-than-light travel is or isn’t possible. Fighting Gravity is like if Ursula K. Le Guin and Orson Scott Card could co-author a book without exploding. On the one hand you have the liberal and social science aspects of Ursula K. Le Guin, and on the other hand you have a character-driven story that isn’t afraid to be entertaining.
The depth of Leah Petersen’s writing gives the reader credit and engages multiple aspects of the self. For that reason, I feel confident recommending this whirlwind read to a variety of genre readers, from Romance to High Fantasy, because even a lover of High Fantasy would enjoy the conflict arising when an Emperor and a boy from the ghetto lock eyes. If you’ve had trouble getting into other science fiction, give Fighting Gravity a spin. You don’t have to be a mechanic to enjoy the hum of a classic engine.
Posted by Michelle Ristuccia at 9:30 PM