I was so excited for Unleash, which already had good reviews from awesome people, like:

“A visceral, heart-pounding ride of a book that will keep you guessing until the final bloody breath.” – Award-winning fantasy author Pip Ballantine (The Books of the Order, The Ministry of Peculiar Occurrences)

And Gail Carriger intereviewed Lauren Harris. How cool is that? So of course, I read the book, and after devouring it in two days, I can give you my own glowing review: 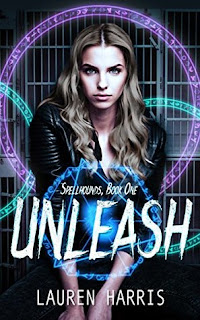 In contemporary urban fantasy Unleash (Spellhounds, Book One) by Lauren Harris, Helena Martin fights to break the spell binding her to her sadistic abuser, a powerful mage intent on destroying her family lineage. When well-meaning mundanes offer her a couch to crash on while she waits to contact her cousin on the run, Helena gets a taste of the normal life her abuser has stolen from her. Too bad the Guild is after her and strange happenings keep endangering her and her mundane rescuers.

Lauren Harris writes heart-stopping action scenes while delving into the emotional backlash of abuse--which for Helena includes panic attacks and a painful disconnect from your average social scripts. Readers get a good feel for how dangerous and damaging Helena's situation is, and as a result, Helena comes out on top as an even stronger character. The gritty realism of Unleash was a welcome break from the lighter urban fantasy I usually see. Flowing banter, plot twists, and pointed descriptions round out the action to make Unleash a compelling read.

The wonderfully nail-bitting world of Unleash involves ancient magic drawn through mandalas, blood magic, shapeshifting, and a powerful sorcerer's intent on hiding it all from mundanes. And then there's the heart-warming volunteer dog rescue and the rescuers who only want to give Helena a safe place to stay, away from whatever horrible thing she ran away from. Mandalas and dangerous puppies. Doesn't that make you want to dive in?

Pick up Unleash by Lauren Harris on Amazon.

Add it to your Goodreads list and give it some love there and on Amazon. Every review counts!

Unjust is the cool prequel you get for signing up!

Posted by Michelle Ristuccia at 10:25 PM No comments: