Review: The House in the Cerulean Sea by TJ Klune

This uplifting tale of found family will restore your faith in humanity, and in your own power to work good in an imperfect world. 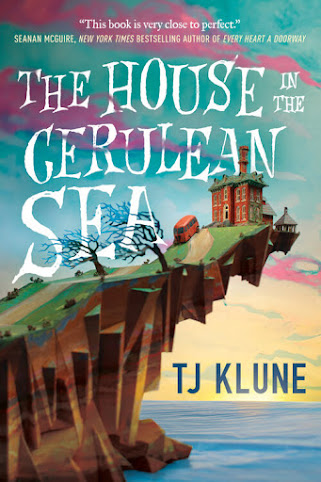 The House in the Cerulean Sea by TJ Klune

One thing I found wonderfully unique compared to other found-family stories is how it follows the perspective of a parent-figure protecting children. While a coming-of-age story where young adults connect with peers can be wonderful, as a mother with children of a certain age, I found much more in common with middle-aged Linus and his sense of inviolate responsibility for the children in the orphanages he inspects.

Ah, Linus. Before we even get a hint of the found family, we're sold on our wonderful main character. T.J. Klune starts readers with Linus on the job, inspecting an orphanage for the Department in Charge of Magical Youth, watching a child levitate bricks. Immediately, we see that the Department itself has its bureaucratic, soul-crushing flaws, flaws that Linus dare not recognize because that would question his entire purpose in life, but that Linus himself cares deeply for the children. This makes him perfectly suited to his job, yet at the same time, also causes him to clash with his boss and workmates.

Linus' position at work is ultimately untenable, despite the fact that he thrives on rules. When the Department hands him a top-secret assignment above his paygrade, perhaps his worst fear will come to fruition, and the mission will end with the termination of his employment--or, perhaps he will discover that the loss of his job is not his worst fear after all. For someone who cares so deeply about the children, it can't be.

The emotional depth of this story makes me thrilled to call it a slow-burn romance (M/M). The way both men put the kids absolutely first speaks volumes to their character. They have a job to do, one more prescient than the romantic attraction of two strangers who have just met. Both men protect their hearts, needing to check, first, that the other is a trustworthy partner. This is especially true for Arthur, the master of the top-secret orphanage Linus inspects. I don't want to give too much away about Arthur because remains a bit of a mystery for most of the book. And for Linus, even as he hopes that Arthur's intentions for the children are good, it's the results that matter, results that can be difficult to measure when dealing with magically powerful children from troubled backgrounds.

And did I mention that one of the children is the son of Satan? This wholesome fantasy, with its perfect touch of oddball humor, will have readers begging for more.

Check out T. J. Klune's upcoming release for Fall 2021, Under the Whispering Door

Posted by Michelle Ristuccia at 3:26 PM