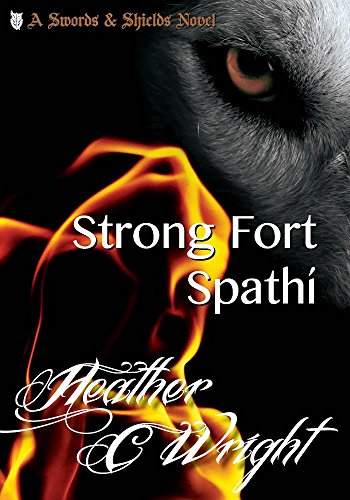 Strong Fort Spathi follows werewolf Jordan as he scrambles to find his missing Spathi--his magical shield and, more importantly, his best friend since childhood, Sinikka. Jordan's only clue is Sinikka's scent disappearing into thin air and his magical bond with Sinikka, which lets Jordan know that his best friend yet lives. That small reassurance and the help of his packmates might keep him sane enough to entertain visiting Oplarchêgós hopeful Andrew Farkas, whose arrival marks the immutable start of the Dokimés, ritual paw-to-teeth contests for the title of Oplarchêgós.
When Sinikka wakes up with twelve other missing witches, she immediately realizes two things: her captors need her for a powerful ritual, and Jordan might not get there in time, if at all. Her captors know exactly how to hide her and how to force her hand, and they're ready to start now. What they don't know is that spilling her blood will give her komistês Jordan the power to find her anywhere on Earth. As the strongest and most knowledgable witch under her captors' thumbs, it's up to her to figure out a way to thwart the ritual and call in reinforcements.
Werewolf Andrew Farkas came prepared for the usual politics of the Dokimés. He did not come expecting to fall for a distraught werewolf consumed by a missing person search, in the middle of his own battle for Oplarchêgós. When Andrew offers to help search, Strong Fort pack politely declines, and his protege Tyler warns him to stay away from Jordan. As much as Andrew wishes to spare Jordan the politics of his attraction, he can't help the way his interest shows whenever Jordan walks into the room. With tension in the fort as volatile as a gathering thunderstorm, Andrew must choose his words carefully if he says anything to Jordan at all.
Strong Fort Spathí delivers an engaging read with great pacing and strong characters that could easily carry a series.
Readers will fall in love with Wright's refreshing portrayal of werewolf pack mentality that kicks toxic masculinity to the curb: Wright's werewolves cuddle and kick ass better for it, because they know that a little empathetic/platonic touch can go a long way to keeping their wolves at bay. The pack offers what we all need on some level: cooperative friendship, where members can support and care for each other without it being misconstrued as amorous. Yet, is romance banished from Wright's world? Hardly. Wright skillfully weaves in a slow burn romance while keeping the pack's puppy pile platonic. Where Jordan and Sinikka care for each other like close siblings, Andrew's infatuation enters the page the moment he walks into the narrative, promising a longer story arc that readers will want to follow in sequels.
Strong Fort Spathi offers readers a kidnapping plot that gleefully defies expectations. Sinikka is anything but a maiden in distress as the stakes rise against her and the other witches. She knows the value of her own agency even in the face of stronger magic, and her bond with Jordan is anything but a crutch. Werewolves are everything we want werewolves to be, and more. Strong Fort Spathí is a delightful urban fantasy that hits all the genre sweet spots while offering its own unique flavor.
https://amzn.to/2Z9zXezhttps://www.goodreads.com/book/show/20982056-strong-fort-spath
https://www.facebook.com/HeatherCWrightAuthor
Posted by Michelle Ristuccia at 8:28 AM