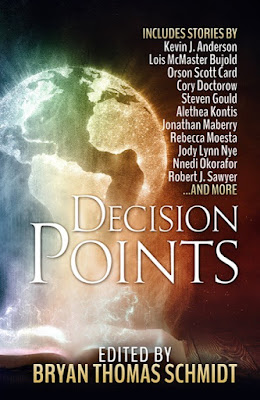 When I saw the author list, I knew I had to have this anthology!

Decision Points is an exciting YA anthology with many strong stories, including:

"Sisters" by Jonathan Maberry, in which two sisters find that zombies are not their biggest enemy.
"The Prince of Artemis V" by Jennifer Brozek, which centers around a haunting fae dream realm.
"Aftermaths" by Lois McMaster Bujold, which deals with the carnage left by a war in space.
"My Father's Eyes" by E. C. Meyers, in which a disease robs its victims of their intelligence and sends them back to primitive existence.
"Like a Thief in the Light" by Alethea Kontis, which deals with death and gargoyles.
"Clockwork Fagin" by Cory Doctorow, in which orphans take over the orphanage and build a clockwork man to fool the adults.
"Rivalry on the Sky Course" by Bryan Thomas Schmidt, which ties into Schmidt's Saga of Davi Rhii space opera.
"An Echo in the Shell" by Beth L. Cato, a haunting tale of a grandmother who is turning into a giant bug.
"Blood and Water" by Kate Corcino, in which the protagonist is asked to murder his girlfriend.
"Newts" by Kevin J. Anderson, where a separatist war rests on the shoulders of an emotionally neutered protagonist.
"Shade" by Steven Gould, where a dire water shortage in Africa is alleviated through magic.
"The War of Gifts" by Orson Scott Card, which ties into Enders Game and deals with childhood abuse and religious hypocrisy.


Decision Points on [ Amazon ] and on [ Baen ]'s website, as well as most other places where books are sold.

Don't forget to leave a review, event a short one, to support your favorite authors!
Posted by Michelle Ristuccia at 7:56 AM