Review: The Overseer's Son by @SarahJaune 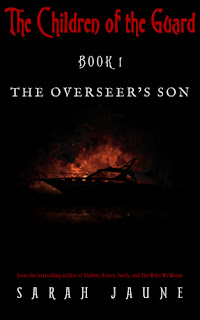 The Overseer's Son (Children of the Guard Book 1) by Sarah Jaune is a post-apocalyptic science-fiction fantasy following Elijah Hunt, son of a powerful magician, the Overseer of Chicago:

Imagine a world where there are only two classes: people with power, and people without.

Imagine a world where cities are ruled by families with magical powers, where their will determines their citizen's lives, and where the strongest thrives.

For Elijah Hunt he doesn't have to imagine a world where bullies rule. He lives it everyday under the cruelty of his magical father: the Overseer of Chicago.

Will Elijah choose to run from the father determined to mold him into a monster too, or will he stay and face his future? Will Eli even have magic of his own?

The stakes are high as Eli and his sisters have to choose whether to stay or run for their lives.

Although the introduction may come off as a bit of an info-dump, the majority of The Overseer's Son is a fun coming-of-age story propelled by big magic, engaging dialogue, and a clear moral foundation.

As Elijah meets new friends who help him unlock his potential, he also witnesses the true state of the Chicago first-hand. Readers learn about an expansive world that blurs genre by combining technology and magic, and Elijah learns about problems too big for any one person to fix, but also too big to ignore. These discoveries drive him to moral crisis as he confronts the man his father wants him to be, the man others hope he can be, and the person he thinks he is.

Elijah receives wonderful support from other characters but finds that he still must fight an internal battle – will he grow up to be a monster like his father? Can he truly escape his father's physical and emotional influence? Sarah Jaune addresses many of the issues that stem from childhood abuse, and does so in a way appropriate for upper middle-grade and YA audiences.

The Overseer's Son hints at bigger mysteries to be explored in later books, adding depth to the world while promising an adventure-oriented plot. Dark undertones introduce the readers to deep issues such as poverty. Yet, Elijah's story is a positive narrative of overcoming obstacles with the wise and loving support of family and friends.

You can find The Overseer's Son on [ Amazon ] and [ Goodreads ], and you can connect with author Sarah Jaune on twitter @sarahjaune
Posted by Michelle Ristuccia at 6:43 AM