Guest Blog - The Editing Process for Self Pub

Guest Blog by Lauren Harris of Ink-Stained Scribe and Pendragon Variety Podcast. Find her on goodreads, facebook, and twitter, too! 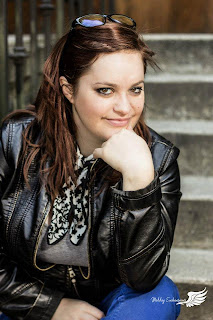 Confession: I’m a grammar nerd. That may not shock anyone--I mean, this is a post about editing. Then again, not all writers are pedantic about punctuation. I am. In fact, I’m so picky about proper semicolon usage that I legit got an eye twitch reading a poorly-punctuated article this week.

Unfortunately, that doesn’t mean I’m perfect. My friend Abbie, author of The Guild of the Cowry Catchers, once mentioned that fans of her books constantly send her emails to point out flaws in spelling or punctuation, and I know from experience that even her first drafts are fairly clean.

Copy editing is the second most important step of preparing your manuscript for self-publishing, because readers are honestly looking for any reason not to buy your book (and often, blocked writers and artists are looking for any evidence that they are somehow superior, though they have not yet sent their work out into the world, and correcting someone else’s work scratches that itch). Mostly, though, it’s because people have shit to do. Read a book with a careless comma-splice in the second paragraph? Ain’t nobody got time for that. At least, not the folks who buy your books on Amazon.

Now you’re probably wondering what the most important step is (or what I think it is, since I’m not exactly the arbiter of Indie Press Quality Control). It’s having a fantastic story/book.

Don’t roll your eyes because you’ve heard that before--we’re still talking about editing here. Part of having a fantastic story or book is the messy, painful process of delivering your brain-baby onto the page (eww). Like a baby, you’re going to be pretty protective of it for a while. You may want to show it to everyone, but if you do show your folks the product of your head-womb (how’s that for a kenning?), they sure as Loki’s got shiny gold horns better say only good things.

Because your baby is vulnerable.

Because you’re one cup of coffee short of a postpartum meltdown and not quite ready to hear that it’s wrinkly, red, squinty, stinky, and there’s a penis-shaped birthmark on the back of your thought-baby’s head. Or maybe it’s not a baby at all. Maybe you wanted a sci-fi baby and ended up with a changeling dystopian-horror baby without legs.

Whatever. Put your baby in a drawer.*

One of the great things about indie pub is having complete creative control, but you probably want to have complete creative control over something that sells enough copies to construct a scale replica of Gondor in your local park. I mean, I do. For your baby to grow into that kind of mass-appeal monster, you’ve got to operate on it Dr. Frankenstein-style (but this is the 21st Century, so get a second opinion). Before you gnash your teeth about selling out, I am not talking about writing for the market or for what’s popular. I’m talking about finding the core of awesome in your story and helping it achieve its full potential.

For that, you need the developmental edit. A developmental edit (also sometimes called a substantive or substantial edit) is content editing--it focuses on things like structure, worldbuilding, character, style, theme, pacing, and other macro-level issues. In other words, this is the type of editing where a beta reader or paid professional clears their throat and says, “Hey look, your baby isn’t a sci-fi baby, but it is already a really cool dystopian-horror baby, you just have to give it legs and get a hat to cover up that penis-shaped birthmark.”

Not every story needs developmental editing. Sometimes we end up with stories that leap from our brains like Athena, gray-eyed, fully-formed and dressed in shiny, shiny armor. Chances are, though, if you’ve written a longer story, your brain baby looks a little more like Hephaestus.

In a moment, I’ll go over a few ways to go about getting a developmental edit, but first I’m going to share with you why this was such an important stage for me in the process of working on EXORCISING AARON NGUYEN.

After writing the first draft, I shared it with a few critique partners in my local group, who had a few comments, but didn’t have a ton to say about it one way or the other. Something nagged at me, because I knew I was missing some crucial element that kept it from being a great story.

I sent the manuscript to my friend Ian, who is a published author and a really stellar beta reader. He gave me back about half a page of comments, but it was one criticism in particular that really hit the nail on the head: I had set up a murder mystery, and I hadn’t delivered one. I made that bit too easy.

Partly, that was because I was resistant to writing mystery. I hadn't really read mystery unless you counted Harry Potter or my early years reading The Boxcar Children, so I hadn’t felt qualified to write it. Problem was, he was absolutely right--the murder mystery element of my story was weak, and that flaw in structure kept the story from being all it could. So I did some brainstorming with my writing group and realized that, in order to really make the story awesome, I had to rewrite most of it.

I’m so glad I did. I went from having a story I was okay with to a story I really adore, and that edit not only fixed the issue of the mystery, it helped me come up with a few characters who articulated the theme of the story more profoundly in my second draft.

After finishing the second draft, I was on twitter and ended up winning an edit from Alice M. (@notveryalice), who was new to YA, but a very keen eye and even more of a grammar goose-stepper than me. She helped me focus my characters and clarify the worldbuilding.

So how do you go about getting a developmental edit? Like almost everything, it requires some combination of time (yours or other people’s) and money. Here’s how the combination falls:

This last one can be done in a number of ways, but if you’re going to do it, I recommend using Holly Lisle’s “How to Revise Your Novel” course. I know she’s closed the course, but you can still purchase the lessons as ebooks. They were extraordinarily helpful to me in learning about structure and spotting the problems in my own work.

The final advice I have for editing your manuscript is to read it out loud, for an audience if possible. You will hear all sorts of things when you read your own work carefully, and it can be beneficial to read your own dialog and see if it sounds like something a person might actually say. Harrison Ford once famously told George Lucas, “You can write that shit, George, but you can’t say it.”

I’m a narrator and voice actress as well as a writer, and it’s amazing the number of typos, misspellings, and sentence-rearrangement artifacts get left in published work. I’ve found loads in the books I’ve narrated, and a good number of them in my own work as I read it out loud.

So, when your head-baby has languished in a drawer for a few weeks, give it another look over and see if you notice anything that needs a little surgery, then get some content feedback from a beta-reader, an editor, a course, or the voices in your head. Once you’re happy with your baby’s basic form, have it copy edited (again, this can be hired out, begged, or done yourself, but if you do it yourself, I recommend reading it backwards sentence-by-sentence). Then read that baby out-loud, give it it’s final Dr. Frankenstein nip-tuck and send it out into the world to terrorize the locals.

Oh, yeah. And I’m supposed to do that promotion thing. Read my YA Paranormal novella, EXORCISING AARON NGUYEN. You will laugh at least once, though hopefully not at a wayward comma.

Posted by Michelle Ristuccia at 10:49 AM