TNG Ep 7: Lonely Among Us

Summary:
While delivering some undignified dignitaries to Parliament, the USS Enterprise encounters an energy cloud that deposits a sentient being into their computer systems. It takes the crew the entire episode to figure this out because they are distracted by the Anticans and Selay having a blood feud on their ship and because Dr. Crusher apparently considers an hour of memory loss an everyday occurrence. Luckily for them the energy being takes over Picard and recaps everything they've missed. The energy being and Picard become one, beam themselves into the energy cloud, where their union dissolves itself, leaving Picard floating out in space wondering what the heck. Riker almost abandons the captain before Troi senses Picard's presence. When they beam Picard back using hocus pocus transporter magic, he doesn't remember anything except how annoying the feuding aliens are. Tasha comes to report that one of the Selay have probably been murdered, but whatever. The end!

In practice, I thought the episode made all the characters look stupid, and then I felt stupid for not realizing that the Anticans and the Selay were just comic relief. I mean, there's comic relief, and then there's letting them get away with murder, right? The Enterprise crew does not care that one of the Selay has probably been murdered by an Antican at the end of the episode. I guess that's because it wasn't one of their crew members - oh wait! They don't care about that either. All they want is to get the episode over with so that they can get the heck outta dodge and get the Anticans and Selay off of their ship.

But the biggest problem with this episode is not even the uncharacteristic handling of the alien dignitaries. The problem is that the only real mystery for the viewer is how these two parties are thwarting the awesome security of the Enterprise to eat each other. The energy being is not a surprise because we get to see everything about it, while the crew doesn't. This leaves you shouting at the crew to stop ignoring their sudden memory loss and figure it out already. I also had the misfortune of guessing that the energy being was peaceful because it handled Beverly so much better than it handled Worf. On the same principle, not really sure why it killed the next guy, but then achieved perfect fusion with Picard. Whatever. We all make mistakes, right? Fry up a Selay dignitary here, fry an Enterprise officer there...

Lastly, I thought it was a bit of a cop-out that Picard didn't remember anything even though his fusion worked better than the others. Does no one feel even the slightest bit betrayed that energy-captain-Picard abandoned them so gleefully?

5 minutes later...
Riker: Oh thank goodness you're back, Picard! I might have had to marry Troi!

So, I didn't like this episode. The best part about it was that it had the guts to kill off an officer. Consider this entry as me pouting. It looks like: 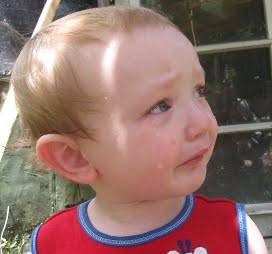 Aw. Did you spot that one tear trickling down his face?

That's ok, though. I see that the next episode has half-naked men and women in it, and my dad assures me that it is "the best worst episode ever," meaning that I will love it. Yeeeeeeessss...
Posted by Michelle Ristuccia at 11:00 AM