Review: Witchfinder by Sarah A Hoyt

In Witchfinder by Sarah A. Hoyt, Seraphim Ainsling and Gabriel Penn secretly defy the king's edict to rescue witches facing death on other Earths. Meanwhile, Nell strives to ransom her lover's freedom by spying on Duke Seraphim, and so finds herself caught up in the Duke's heroic escapades. After Sydell, the king's spy, confronts Nell for the information she owes him, an attack on Seraphim and Gabriel throws the three of them into the spiral of a much larger plot that could destroy Avalon, Fairyland, and the surrounding alternate Earths.

Witchfinder boasts a fine balance of female and male protagonist voices headed by Nell, Gabriel, and Seraphim. Although it may appear at first as if Seraphim is the typical heroic main character, Nell quickly comes into the mix as an equally powerful voice, and Gabriel becomes more important as the larger plot unfolds. Seraphim, Nell, and Gabriel's intertwining paths culminate in magical battles that shake the foundation of their worlds.

Hoyt brings us a fun twist on the heroic trope of a knight who runs off into danger, saving maidens along the way. The many iterations of Avalon, most of them calling themselves Earth, provide everything from fairies and dragons to the machines and iron of the modern world.

Witchfinder's plot proves as complicated as its multiverse, evoking comparisons to Roger Zelazny's Nine Princes in Amber. But where Zelazny gave us a plethora of princes and princesses at war, Hoyt offers us compassionate characters with deeper ties of brotherhood and romance.

Witchfinder is an epic adventure fantasy that draws the reader along on a enthralling journey of heroism through colorful alternate universes, pitting cousin against cousin and human against fairy as greed threatens to destroy all.

You can read the beginning of Witchfinder [ here ], and purchase the book on [ Amazon ] and [ Smashwords ].

As a bonus, Witchfinder has an interesting real-world origin: it started out as chapters posted to Sarah A. Hoyt's blog. Hoyt is posting Rogue Magic, Book 2 [ here ].
Posted by Michelle Ristuccia at 5:01 PM No comments: 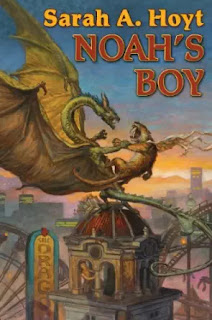 Noah's Boy (Shifter Book 3) by Sarah A. Hoyt continues with Kyrie and Tom and their shifter friends as they must again assert themselves against older shifters, but what they don't know is that bigger baddies wait behind the proverbial curtain. This time, they learn about the origin of shifters and become uncomfortably intimate with the Great Sky Dragon's powers. The couple also comes to acknowledge the growing group of shifters that have become friends and allies over the past two books.

I enjoy how Noah's Boy adds a distinctive science fiction spin to this hitherto urban fantasy series. Everything we learn in this book brings tidbits in the first two books to life, giving that delicious feeling of aha! This new depth has the potential to carry the series through several more entertaining books.

The magic/science also adds further weight to the theme of self-agency that permeates the series, from ancient dragons demanding things to romance and sex. Oh, and on that note, there is a sex crime in this book, so, trigger warning for that. Sarah Hoyt realistically handles the issue, framing it as a violation of self-agency. Mixed in with this weighty issue is the question of what makes people human – but you'll have to read the book to learn how that comes up.

Rafiel's character gets a boost in Noah's Boy as well, and if you like how Tom and Kyrie have turned out, you'll enjoy this new pairing. Personally, I appreciate that Hoyt does not follow the typical love triangle plot, and that the two couples are also very different from each other.

Sarah Hoyt once again brings a complicated plot that draws together beautifully at the end, complete with dragon fire and viscous, ancient shifters. The character continue to be refreshingly strong through their principals and their self-awareness, which is something I don't often see in urban fantasy or adventure SF. I'm gunning for the next book!